After a lengthy break in Team OTSFF/MOTUL’s desert racing schedule, the team throttled back into action with their potent 6100 Spec Trophy Truck in the two-day Legacy Racing Association’s Primm, NV event October 2-3. Andre Laurin and his navigator Kerry King pulled out all the stops to put the truck into a respectable eighth overall, despite a computer malfunction that saw the duo pull off to the side of the track, after completing three laps of eight on day two.

The weekend began for the team on Wednesday, September 29, with Laurin and King taking the truck out for a shake-down and do a functions test on the tight and gnarly specially designed desert track. Although Laurin hadn’t been behind the wheel of the 6100 Truck for some nine months, and King for over a year-and-a-half, they traversed the terrain – which somewhat resembled a national championship caliber motocross track on steroids – in fine style! Laurin managed to skim through the three-foot whoops at 100 mph. The truck, prepped as usual by team manager/builder/back-up driver Adam Fitza, proved to be top drawer. The next day Laurin and King thundered through qualifying to claim a fifth place starting position for the first day of racing action on Saturday. 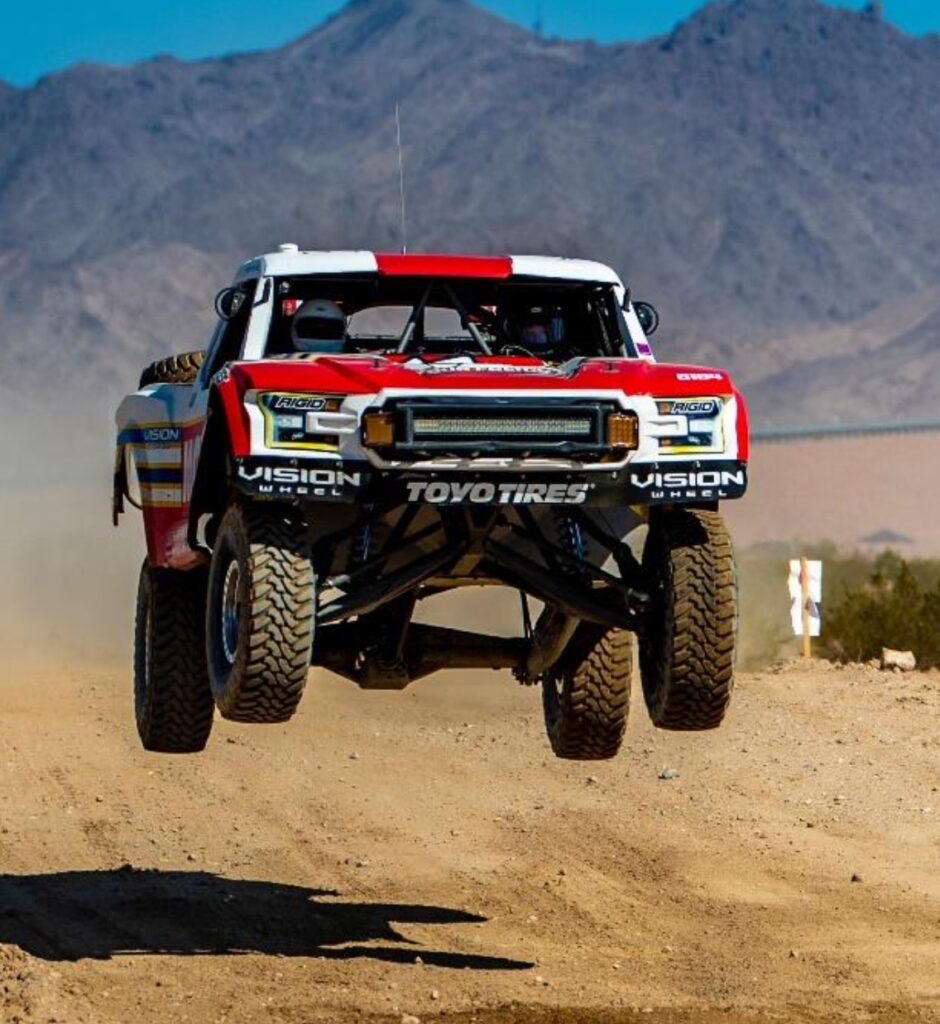 Friday, October 1 saw the team breeze through tech and contingency day. Everybody was eager and ready to put on their race face for Day 1 of battleground competition.

“We were very happy with the truck’s pre-race performance. Once that baby was on the track it seemed to shout loud and clear ‘it’s about time we’re racing again, boys!’. And if there were any concerns about Andre’s and Kerry’s lack of seat time this season, those were quickly dispelled with the ease they took up where they had left off at Round 1 of the seriesin Pahrump, NV back in early January,” Fitza noted.

Saturday, October 2, the OTSFF/MOTUL truck blasted off the line in fifth place. Laurin put the hammer down and was totally meshing and flowing with the truck … and the tight nine-mile race course, with its brutal whoops and multiple ‘S’ turns. When all was said and done, Laurin and King lost one position, however, and crossed the finish line in sixth place. It was a great day for the two Canadians and their American pit crew, spearheaded by Fitza. Saturday night saw Fitza scrutinize the truck and do some minor prep work while Laurin and King hit the sack early. It was all systems go.

Sunday, October 2, the final race of the Legacy season witnessed the OTSFF/MOTUL truck rocket off the line in sixth place, the position they finished in the previous day. In the first two laps, Laurin and King were rapidly gaining ground on the drivers ahead of them, clocking lap times that were 10 seconds faster than the previous day. At the end of lap 2, however, on the famous ‘Dyke Jump’, they noticed a ‘stumble’ that almost sounded like a misfire. Ooops! They powered on and were driving at speed, working their way up the field. Unfortunately, mid-lap 3, the truck lost most of its power due to an on-board ECM (Electronic Control Module) failure. It was game over! That was the bad news. The good news was – at least for Team OTSFF/MOTUL – that Day 2 claimed four other top contenders as well. They DNFd on lap 1, giving Laurin and King a points advantage for having spent more time on the track. If they could have stayed on course at race pace, it should have been a podium finish for the team.

“My goal was to ‘limp’ the truck around for the final four laps and get the guys to the checkered flag as we have had to do at some races in the past. But to maneuver around the Primm track with 15% power is near impossible in the deep sand, regardless of the fact that Andre was driving at 100%,” Fitza said. “Considering we have been racing the 6100 Spec Trophy class for the past three years without a single DNF, we knew that sooner or later it could happen and it did. We know the truck works and what it takes to finish a race. One small item that’s out of any of our control let us down. That’s racing. If it was easy, everyone would do it. We will be back stronger and tackle the next one by storm.”

Despite missing one round of the Legacy Racing series in May, and Sunday’s DNF, Team OTSFF/MOTUL is still slated to finish the title hunt in the top-10 club. Final results were not available at press release time. 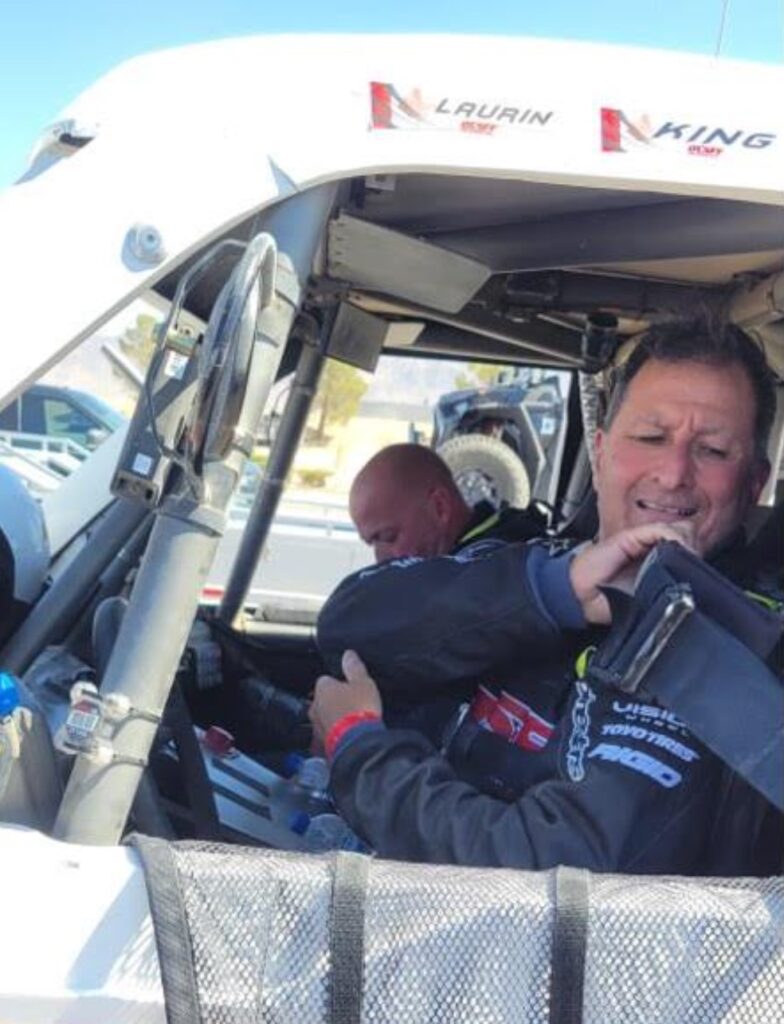 “The DNF was definitely a big comedown, after all the good mojo we were enjoying since Wednesday’s test run. But this is the age of computer assisted everything, and as reliable as they usually are, monitoring things to ensure no catastrophic and costly engine failure occurs, like anything else computers can fail. In this case the actual module was overheating, which it interpreted as the engine overheating and it basically shut us down,” Laurin said. “The engine was performing flawlessly. Everything mechanical on the truck was performing flawlessly. The tires were just eating up the course. We were flying! But you can’t argue with a computer. All in all, it was just great to be racing again. It was amazing to feel the adrenaline pumping again, and harnessing the awesome horsepower and maneuverability of the 6100 truck. After being on hiatus for nine months, just being back in the driver’s seat and being part of an event like Primm was a victory of sorts in the ongoing war against Covid.”

“When you get taken out of what looked good for a podium finish, because of a DNF, it’s always a bitter pill to swallow. But you know that when you start a race your day can end because of one, regardless of how well your vehicle is performing and how well you are performing.

You just don’t think about those things because you’re too busy focusing on the physical and mental aspects of the race. For us the Primm event was still a successful outing and a real challenge tackling it. We were on top of our game, everything unfolded like a dream, until the ECM. For me personally, it was fantastic to be finally sitting next to my friend Andre again in the 6100 truck and pushing our limits to do the truck and the race course justice,” King noted. 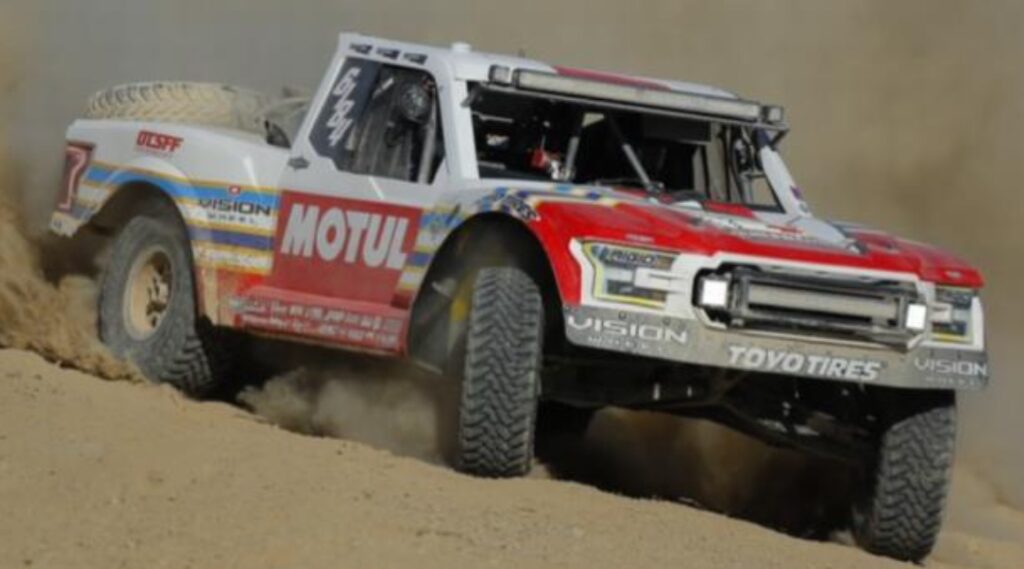 Team OTSFF/MOTUL would like to thank all the individuals and partnering companies for their invaluable support and patience during these trying Covid times. You guys are awesome! We’ll see y’all at the UTV World Championship, October 13-17, in Lake Havasu City, AZ. Then at the renowned Mint 400, which takes place in the foothills of Las Vegas on December 1-5.